OUR 5PM SERVICE IS BACK AND WILL BE HELD IN SCOTS' CHURCH. OUR 11AM SUNDAY SERVICE WILL BE STREAMED LIVE. MORE INFORMATION HERE. 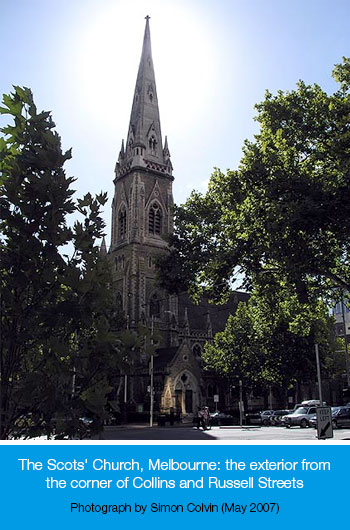 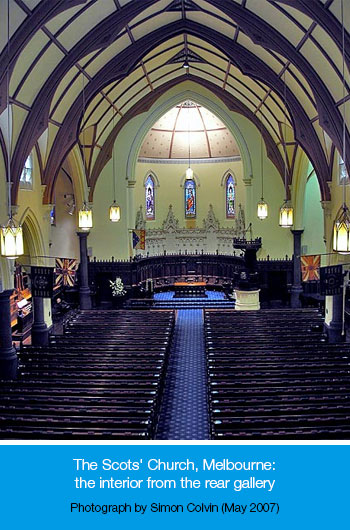 The present site for the church was obtained in 1839. Earlier, in 1838, the congregation met in a temporary church in Collins Street West where a school was also opened by the Revd James Forbes. On 18 February 1839 Forbes wrote to Robert Hoddle with the list of allotments they were able to get from the Crown - the present site of the church and the adjoining buildings. In June 1839 a schoolroom was erected which was also used as a church.

The first church was designed by Samuel Jackson and opened on 3 October 1841. In January 1857 it was decided to place a tower and spire on the church - the existing building was retained but rebuilt in Decorated Gothic style. David Ross was the architect and the work was completed in 1859. Only the bluestone fence survives from this building. Site works for the present church began in 1872 and the previous building was demolished. The well-seasoned planks from the pews were sawn up to make into wooden trackers for the 1874 organ.

The present church was opened in November 1874. The architects were Reed & Barnes and the contractor David Mitchell – Mitchell was Dame Nellie Melba's father. The architects were the leading firm in Melbourne at the time and designed such prominent buildings as Melbourne Town Hall, the Independent Church, Wesley Church, the State Library and, later, the Exhibition Building. It was built at a cost of more than £20,000 excluding the fittings. The height of the tower and spire was at the time 211 feet, although this was later reduced after a lightning strike in the 20th century – this was the highest in Victoria at the time. The building was constructed from Barrabool stone with New Zealand Kakanui freestone for the dressings.

The building has a sloping floor, focusing upon the apse, where there was originally a splendidly carved stone pulpit. This arrangement was later changed and the apse now contains the communion table, elders chairs and a wooden pulpit to the right, all to the design of H.H. and F.B. Kemp. The reorganized apse was dedicated in March 1930. The pews are of cedar. The original carving was executed by Mr Brain – presumably this included the arcading in the apse and the organ case, all designed by Reed & Barnes. The interior is one of considerable simplicity in design and decoration, showing a sense of overall restraint.